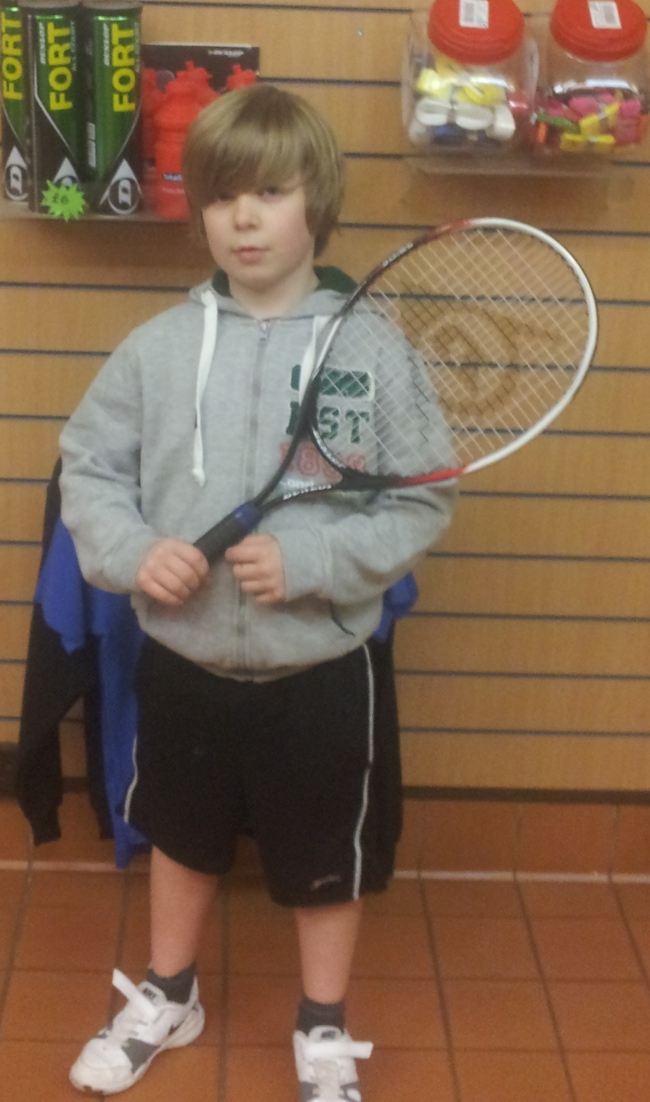 How old were you when you first started tennis?

How were you introduced to the sport?

What made you come to Totally Tennis?

I came to a summer camp

Who is your favourite professional tennis player?

What do you consider to be your best shot?

How often do you play?

Do you play any other sport?

What’s your greatest achievement in tennis so far?

Just before the festive season was in full swing the adult players over at Totally Tennis in Chineham competed in the Hampshire Court Championship tournament run by coach Shyam Vithlani.

Twenty-seven players entered the Men’s Singles draw with each match the best of three sets. Ashley Childs was declared the overall winner after beating Andy Nichols in the final 0-6, 7-6 (9-7) 7-6 (7-2). They both played four matches enroute to the final. Childs defeated Dave Quinn 6-0, 6-0 in round one and had a bye in round two which put him in the quarter finals. In his first round match Nicholls beat Andy Small 6-3, 6-1 and then John Mosquera 6-2, 6-3 in round two. Childs beat Ant Langley Smith 6-3, 6-3 in the quarters and Gavin Lancashire 6-3, 6-4 in their semi-final match. Nichols beat Malcolm Mc Phail and Stuart Eaton in the quarters and semis respectively.

In the Ladies Singles fourteen players competed to win the crown. Elaine Whitman took the title defeating Jayne Crowley in the final 6-3, 7-5. Both ladies kept a clean scoresheet on their way to the final by not dropping a single set. Whitman beat Kathy Elliot, Liz Narracot and Jane Reap. Crowley defeated Lesley Miotto, Arlette Quinn and Julia Harker.

Fourteen pairs competed in the Men’s Doubles event with Nicholls claiming his first title of the day with partner Malcolm McPhail. The victorious pair beat Vince Castle/Peter Hillman in a close match 7-6 (8-6) 7-6 (8-6).

Whitman picked up her second title of the day in the Ladies Doubles event with partner Pat Fenwick. The ladies who played alongside twelve other pairs in the tournament beat Quinn/Elliot in the final 6-2, 6-4. Whitman and Fenwick beat Maria Saunders/Lesley Flynn, Lynne Thomas/Crowley and Carol Grant/Lesley Miotto while Quinn/Elliot claimed victories against Jackie Simpson/Lois Fidler, Josie Vanderslott/Barbara Herneman and Alex Nicholls/Denise Gridley.

Whitman was denied a hat trick of titles in the Mixed Doubles competition after her and partner Tony Baker were beaten in the final by Julia Clark and Stuart Hounslow 6-4, 7-5. After a bye in round one Clark and Hounslow beat Nicki and Gordon South in the tie break of their three set encounter 6-4, 0-6 7-4 and won another tie-break to claim their semi-final victory against Ann and Jim Murray 1-6, 6-1, 10-8. Runners-up Whitman/Baker defeated Lynne and Brent Thomas, Kate Scorse and Paul Rummey and  Dave and Arlette Quinn.