British number one Johanna Konta, who was voted Glamour Magazine UK Sportswomen of The Year this week, beat American Victoria Duval 6-3, 6-0 in the first round of the AEGON Nottingham Open. Second seed Konta will now face Zheng Saisai from China in round two today alongside teammate British number four Tara Moore who defeated Croatia’s Donna Vekic 6-2 7-5 in round one and will now play eighth seed Christina McHale from America. 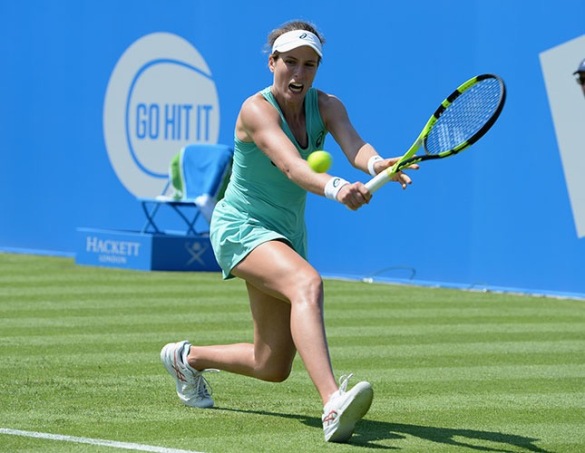 It wasn’t all good news for the British ladies however as their grass court preparations ahead of Wimbledon were halted pretty quickly. British number two Heather Watson, Laura Robson and Naomi Broady were all knocked out in the first round, Watson lost against Magdalena Rybarikova after winning the first set 4-6, 6-0, 6-4, Robson lost 6-3 7-5 Michelle Larcher de Brito from Portugal and Brady was beaten by Su-Wei Hsieh 6-2, 6-1.

It’s a big achievement for unseeded Moore (currently world number 280), who plays her second round match after Konta this afternoon, as its only her first round win is only her second victory in the main draw of a WTA event. Last week she won an ITF event in Eastbourne but she may still need a Wimbledon wildcard to play at SW19 this year.

For more information about the Nottingham Open visit www.lta.org.uk/major-events/aegon-open-nottingham/