by Totally Tennis
Totally Tennis performance players Isla Hignett and Jasmin Bromilow played in the HSBC Road to Wimbledon Hampshire & IOW County 14 U Girls Singles final held in Southsea after finishing winner and runner-up respectively in the club event last month.
Even though the windy conditions made it tricky, Hignett won her first match convincingly 4-0, 4-0 against Poppy Marston but then faced top seed and last year’s winner Estella Hurlock in her next match where she was beaten by the older and higher rated player 4-0, 4-0.  Second seed Bromilow beat Imogen Sillitoe 4-0, 4-0 in her first match and Chloe Tarling in the quarter finals 5-3, 4-o but lost in the semis to Mia Gerty 4-2, 5-3. Hurlock then beat Gerty in the final 4-0, 5-3 to progress to the next stage and play at Wimbledon next month. 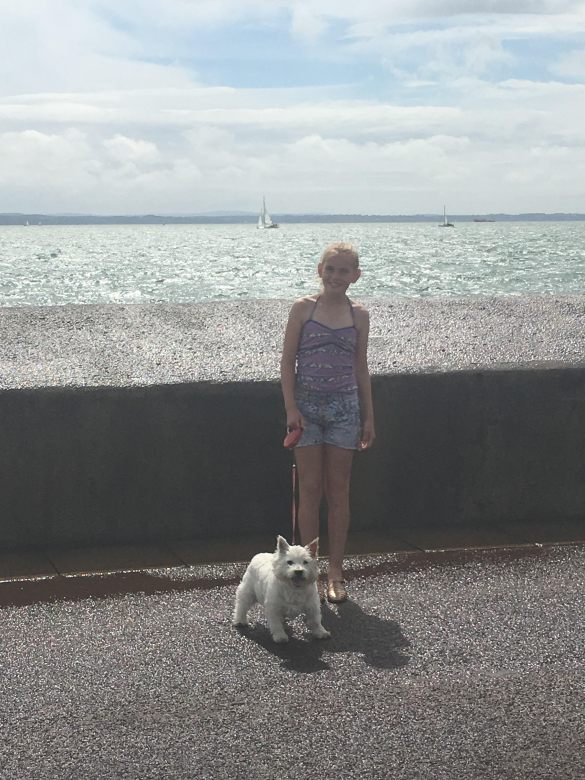 Isla and her dog Lilly enjoying Southsea Beach after the tournament had finished
Donella Hignett (Isla’s mum) said of the event “It was played at the Southsea Tennis Club which is closer to the beach on hard courts as the grass wasn’t ready.  It was extremely windy making conditions quite tricky.” she added “Both girls received bottles and headbands as participation prizes.“
The HSBC Road to Wimbledon competition is the biggest junior tournament in British Tennis and gives all 14 and under players the opportunity to progress through to compete on the world famous grass courts at Wimbledon. Local clubs, parks and schools are encouraged to enter and stage a tournament for their junior players and Totally Tennis is a keen supporter of this annual tournament having had many squad players get through to play at SW19 in the past including Hignett’s older brother Liam.