Totally Tennis mini performance player Hayden Cummings has been competing in some tournaments over the past couple of months. At the beginning of this month he won the 10 & under Grade 3 Cardiff Mini Tennis tournament held at David Lloyd Club Cardiff in South Glamorgan. In the first round he beat Tom Bewley 5-3, 4-1, Nathan Shore in the quarters 4-0, 4-0 and then Matthew Mclain in the semis 5-4, 1-4, 10-8. In the final he defeated Edward Bennett 4-0, 4-1 to win the event.

Last month he competed in both the 10 & under singles and doubles at the Sutton Tennis Academy Easter Grade 2 Tournament.  In the doubles, Cummings and partner Tuna Lokman were runners-up after losing in the final against Rhys Lawlor and Jacob Cairncross 5-3, 4-0. In the quarters they beat Harry Cornhill and Conrad Plum 5-4(10), 4-1 followed by Nathaniel De Mariveles and Pavana Nrshinga in the semis 4-1, 4-2. In the singles event he competed in the qualifying stages in Group F but did not progress to the main draw after losing to both Jacob Cairncross and Alexander Farmanbar. 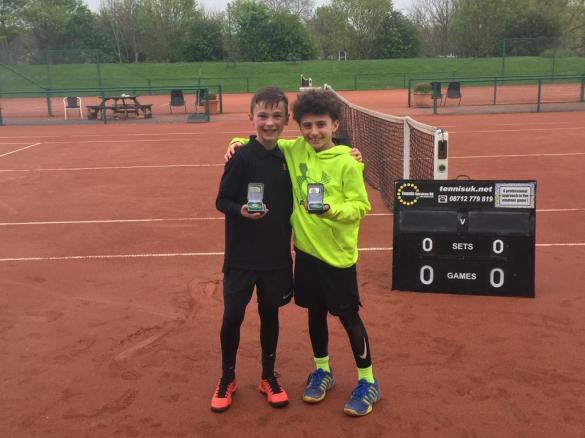 He also finished third at the Finchley Manor Junior Open Tournament in Middlesex after wining the third/fourth place playoff match against Charlie Ripp 4-0, 4-1. After a bye in the first round he beat Giorgio Giliberti 4-2, 4-1 before losing in the semis in a three-set battle against Denzell Darkey 2-4, 5-4(3), 1-0(4).

Head coach James McIntosh said, “Hayden has continued to progress in his lessons to improve his game and his hard work has paid off by qualifying for the National Grade 2 event and winning the Grade 3 tournament in Cardiff.” he added  “Well done Hayden, keep up the good work.”

Cummings will be representing Hampshire in the 10 & under County Cup at the end of May.