The current COVID-19 pandemic has impacted so many people across the globe in both their health and professional life. While most people are luckily enough to be able to work from home, professional tennis players, like most people involved in sport, have seen all their tournaments either cancelled or postponed until further notice.

In the tennis, the three remaining Grand Slam tournaments of 2020 have been disrupted, the French Open has currently been re-scheduled to September, the Wimbledon Championships have been cancelled (the first time since World War Two) and the US Open maybe re-scheduled for later in the year. This summer’s grass-court season has also been cancelled and there will be no professional tournaments happening elsewhere in the world as both the men’s and women’s professional tours are suspended until at least mid-July.

So what are the professional players doing to keep active during self-isolation ? Former British and World number one Andy Murray challenged fellow professionals and tennis fans to try his 100 volley challenge. Murray took to his Instagram with wife Kim to complete the challenge in his back garden – Totally Tennis performance players Liam and Isla Hignett rose to the  challenge, see their video on our Facebook and Instagram

Tonight (17th February) Murray and current world number one Novak Djokovic will be live on Instagram (6pm BST) to answer any questions. Got a question? Comment on Murray’s Instagram post for a chance to be featured. Djokovic himself challenged his fans to try some acro yoga with a partner, he demonstrated the move with is wife Jelena on his Instagram page and they also completed Murray’s volley challenge.

Meanwhile another former World Number One and 20-time singles champion Roger Federer gave his fans a social media tennis lesson. Federer took to Twitter and Instagram to offer his followers a solo drill to improve their volley skills, he tested his reflexes hitting the ball more than 200 times – the video has already been viewed over 3 million times. Federer asked his fans to video themselves in a hat and recreate his drill with the hashtag #tennisathome and then he shared a selection on his feed. Fellow champion Serena Williams took up Federer’s challenge posting her volley video to her page. 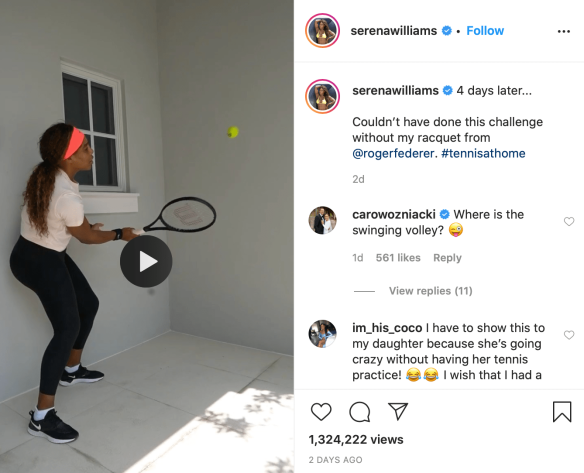 The ATP Tour has been forced to suspend the 2020 Tour so the rankings have been frozen until it’s resumed, Djokovic still sits in the No. 1 spot but the frozen weeks will not count towards his reign.

If you need some inspiration to keep you occupied while in self-isolation check out the #AtHomeWithTheHignetts series with some challenges and fun games demonstrated by Liam and Isla Hignett – click HERE to see more.