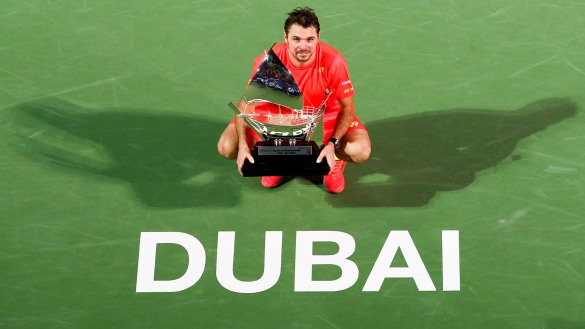 French Open champion, Wawrinka saved five set points in a tense tie-break against Baghdatis that thrilled the crowds. The victory was Wawrinka’s ninth straight final win and his second ATP World Tour title of the year after he won the Chennai title in January. Semi-final opponent Nick Kyrgios retired with a back injury giving Wawrinka a pass through to the final. In a tournament shocker, World Number One and four time Dubai champion Novak Djokovic had been forced to retire during his quarter final match against Feliciano Lopez due to an ongoing eye problem.

In the women’s event Sara Errani defeated Barbora Strycova 6-0, 6-2 in the final to become the first Italian player to win the Dubai Women’s title. Fourth seeds Rohan Bopanna and Daniel Nestor won the Men’s Doubles title beating the unseeded pairing of Aisam-Ul-Haq Qureshi and Nenad Zimonjic 6-4, 6-1 in the final. The Women’s doubles title was won by Darija Jurak and Chia-Jung Chuang.

Hayden Cummings topped this year’s  race leaderboard and was crowned overall winner of the TT tour Mini Red 2015 after winning all his matches on Grand Finals Day. 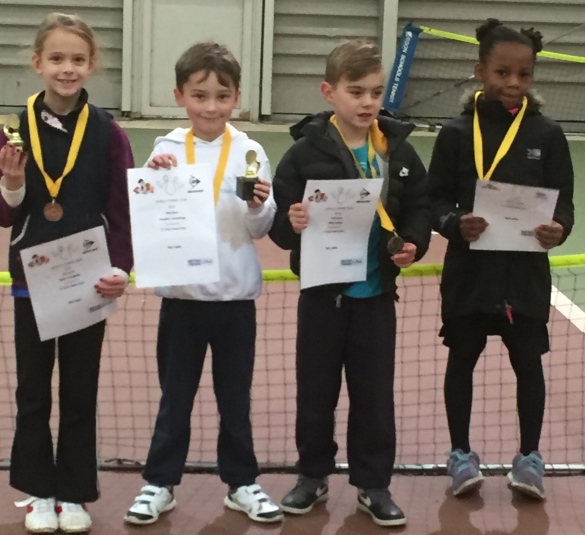 Coach Ben Jubin said, “Congratulations to Hayden and Daniel for being the 2015 champions. I am really pleased with the standard of tennis of those that entering and I hope to see more players competing in future events.”

The TT Tour is a series of tournaments that is open to all squad players running until October when the top eight players of each leaderboard will be invited to play in the Grand Finals in November with a chance to be crowned champion. Points are awarded to the winner, runner-up and third/fourth place players for each event as well as for entering. The Grand Slam events of the Australian Open, French Open, Wimbledon and the US Open offer higher points and all points will be added to each age group leaderboard.

British number one Andy Murray had to settle for runner-up for the fourth time today as World Number one Novak Djokovic won his fifth Australian Open title at the Rod Laver Arena in Melbourne. The win in four sets 7-6 (7-5), 6-7 (4-7), 6-3, 6-0 gave Djokovic his eighth Grand Slam title in a packed arena .

This years champions were

Top seed Serena Williams has won her sixth Australian Open title today at the Rod Laver Arena in Melbourne after beating World Number Two Maria Sharapova in the final 6-3, 7-6 (7-5). This latest Grand Slam title, Williams 19th puts her ahead of both Martina Navratilova and Chris Evert and kept her eleven-year record of consecutive wins against Sharapova intact. The match which was disrupted due to rain was completed in under two hours and Sharapova did try and fight back in the second set saving match points but the strong serving Williams powered through despite leaving the court to be ill at one point to finish victorious and collect the trophy.

In the Men’s event, British Number One and sixth seed Andy Murray defeated Tomas Berdych in their semi-final encounter on Thursday 6-7 (6-8), 6-0, 6-3, 7-5 to reach his fourth Australian Open final tomorrow where he will face World Number One Novak Djokovic. In a five set dramatic match Djokovic defeated defending champion Stanislas Wawrinka yesterday 7-6 (7-1), 3-6, 6-4, 4-6, 6-0 to book his place in his fifth Australian Open final. Head-to-head Djokovic has beaten Murray previously in both the 2011 and 2013 finals in Melbourne and will hope to do the same tomorrow (match commences 08.30am GMT).

In other news, British junior player Katie Swan, 15 finished as runner-up in the Australian Open girls’ final after losing to Slovakia’s Tereza Mihalikova 6-1, 6-4 missing out on a junior Grand Slam title. The young player from Bristol joins Laura Robson who finished in second place in 2009 and 2010 finals as girls runner-up in Melbourne.

It’s time for the rematch! In last year’s Coaches Exhibition Match Ben Jubin and Jamie Jordan beat Head Coach James McIntosh and Fitness Coach Simon James in an on court battle so this year there’s even more to play for as the older coaches are looking for victory over the younger duo and current champions. This year’s match will take place on Friday 24th April at 6.30pm, so pencil the date in your diary and come down to support your favourite coach in the free event at the indoor centre! Be part of the action with the live one-set, winner takes all  battle of the court!

Last years competitors are ready to do battle again this year

Everything to play for and lots to lose, pride and reputation are on the line as this competitive foursome will be on top form again in a match that will see one pair crowned the winners! Will Jordan and Jubin retain their crown or will McIntosh/James pull it out the bag in 2015? The losers will never live it down, just ask McIntosh and James! Don’t forget to come and support your favourite coach! 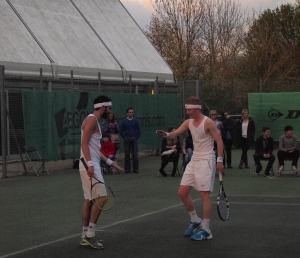 2014 Champions Jordan and Jubin will defend their crown this year

The exhibition match will be followed at 8pm by the latest Adult Social event, a chance to impress everyone off court with your knowledge in a quiz night. 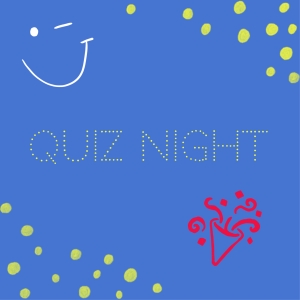 What: Exhibition Match followed by Quiz Night with food.

Where: Totally Tennis’ Indoor Centre/Clubhouse in the War Memorial Park

The matches have all been played and the champions decided in this years Hampshire Court Championships held at the centre in Chineham and run by coach Shyam Vithlani. The Championships was divided into five categories, Men’s and Ladies Singles, Men’s and Ladies Doubles and Mixed Doubles and players had been competing in the preliminary rounds in the months leading up to finals day.

All players and non-players were invited to attend the finals weekend to support fellow members, enjoy some food, drinks and the presentation ceremony. Hampshire Court trophies were given to the winners of each of the five event as well as prizes for the runners-up.

Twenty-five players competed in the men’s singles event. In the semi-finals Malcolm McPhail defeated Ashley Childs 6-3, 7-5 and Andy Nicholls beat Anthony Langley Smith 6-3, 6-4. The final was a closely played three set affair with Nicholls coming out the victor beating his doubles partner McPhail 5-7, 6-3, 6-6 (10-2) to be declared the 2014 champion. 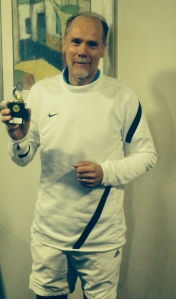 Nicholls won his second trophy this time teaming up with McPhail to win the doubles the event in another close three set final match decided by a championship tie-break. Nicholls/McPhail beat Peter Highman and Vince Castle 6-7(7-4), 7-5, 21-19 in the battle to be crowned champions.

Nicholls and McPhail were victorious in the Mens Doubles

Defending Ladies singles champion Elaine Whitham won the title again this year, competing in a field of twelve players. Whitham beat Jane Reap and Kate Scorse on her way to the final where she defeated Grace Leong in three sets 1-6, 6-4, 10-8. 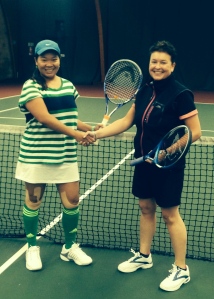 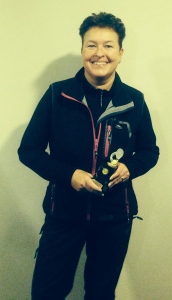 In the Ladies Doubles competition Tina Wood and Emma Giddings were declared the overall winners beating off the twelve other pairs to take the title. Wood/Giddings beat Whitham and partner Pat Fenwick in the final to secure the title. Wood also won the Mixed Doubles title, this time with husband Simon. A fantastic number of  nineteen pairs competed in the event and the Wood husband and wife duo beat Christine Doig and Adam Fitzgerald in the final. 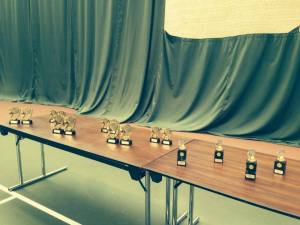 Vithlani said ‘It was another great Championships and I am really pleased with the number of entires in all the events again this year. There was some great tennis played with some really close three set matches and championship tie-breaks to decide the titles. Congratulations to all the winners!” 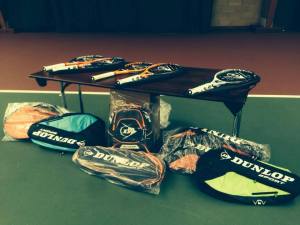 The winners have been decided in the finals of this year’s TT Tour competition. After months of events, shadowing the professional tour, the players at the top of their respective leaderboards after the eight tournaments, competed in finals day to determined the overall champions.

Eight players contested the Red ball finals, playing in two boxes in the group stages. Box A was won by Edward Lakatos who won all three of his matches beating Harry Bale 10-3, Alexando Posolache 10-3 and Ollie Steer 10-2. Bale was runner-up defatting Posolache 10-9 and Steer 10-7. Steer beat Posolache 10-2 in their match. Ben Hastings won Box B after also winning three matches beating Ria Mystry 10-4, Harry Rushbrook 10-2 and Daniel Ward 10-2. Ward won two of his matches defeating both Mystry and Rushbrook 10-2. Mistry beat Rushbrook 10-6 to finish in third place. In the semi-finals Lakatos beat Ward 10-6 and Hastings beat Bale 10-8. Lakatos was declared champion after defeating Hastings in the final 10-3 with Ward winning against Bale 10-8 in the third/fourth place playoff match.

Coach Ben Jubin who runs the TT Tour said “It has been a good year seeing all the players competing in the TT Tour and the improvements and progress they have made, so well done to everyone that took part.” He added, “The finals were very good and I’m sure all the parents where impressed with the standard of tennis. Well done to all those players and I look forward to you all competing again next year!”