Performance player Liam Hignett, who is now coaching at the club during his gap year, is competing in a series of high profile and ITF (International Tennis Federation) pro-circuits tournaments across the country.

His first event at the beginning of the month was the LTA British Tour Paddington Open Mens Singles held at Paddington Sports Club. In the first round Hignett beat eighth seed Jack Gibbens 6-4, 6-4 followed by Jamie Caprice 6-4, 7-6 (5) in the quarters before losing in the semi finals against Sean Hodkin 6-2, 7-5. 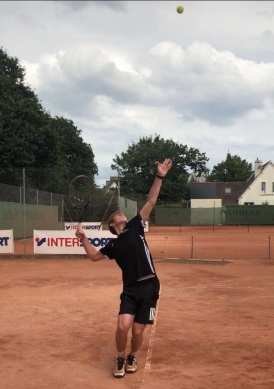 He then starting competing in the ITF Futures events. His first event was the Great Britain F4 Futures event held at Nottingham Tennis Centre where he lost in the first round of singles qualifying draw against George Davies 6-7(4), 7-6(2), 7-5. The second tournament was the F5 Futures event held at the National Tennis Centre in Roehampton, London where he lost to Jonathon Binding in the first round of the singles qualifying 6-3, 7-6(6). This coming week he will play in the F6 Futures tournament in Barnstaple at the Tarka Tennis Centre.

Hignett, who is current Hampshire & IOW County Championships Men’s champion, will be coaching at Totally Tennis sharing his experience and expertise with both adult and junior players as well as offering private lessons and hitting sessions for performance players looking for that extra practice. He will also be studying for his LTA level 3 coach qualification and continuing to run competitions at the club.